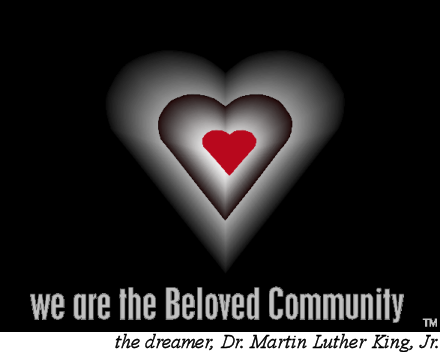 The nonviolent resister must often express his protest through noncooperation or boycotts, but noncooperation and boycotts are not ends themselves; they are merely means to awaken a sense of moral shame in the opponent. The end is redemption and reconciliation. The aftermath of nonviolence is the creation of the beloved community, while the aftermath of violence is tragic bitterness.
-Martin Luther King, Jr., 1957

Love is creative and redemptive. Love builds up and unites; hate tears down and destroys. The aftermath of the ‘fight with fire’ method which you suggest is bitterness and chaos, the aftermath of the love method is reconciliation and creation of the beloved community. Physical force can repress, restrain, coerce, destroy, but it cannot create and organize anything permanent; only love can do that. Yes, love—which means understanding, creative, redemptive goodwill, even for one’s enemies—is the solution to the race problem.
—Martin Luther King, Jr., 1957

There is another element that must be present in our struggle that then makes our resistance and nonviolence truly meaningful. That element is reconciliation. Our ultimate end must be the creation of the beloved community.
April 15, 1960, in Raleigh, North Carolina

The aftermath of nonviolence is the creation of the beloved community, so that when the battle is over, a new relationship comes into being between the oppressed and the oppressor.

I left India more convinced than ever before that nonviolent resistance was the most potent weapon available to oppressed people in their struggle for freedom. It was a marvelous thing to see the amazing results of a nonviolent campaign. India won her independence, but without violence on the part of Indians. The aftermath of hatred and bitterness that usually follows a violent campaign was found nowhere in India. The way of acquiescence leads to moral and spiritual suicide. The way of violence leads to bitterness in the survivors and brutality in the destroyers. But the way of nonviolence leads to redemption and the creation of the beloved community.
Autobiography, Chapter 13 – re: March 1959

There are certain things we can say about this method that seeks justice without violence. It does not seek to defeat or humiliate the opponent but to win his friendship and understanding. I think that this is one of the points, one of the basic points, one of the basic distinguishing points between violence and non-violence. The ultimate end of violence is to defeat the opponent. The ultimate end of non-violence is to win the friendship of the opponent. It is necessary to boycott sometimes but the non-violent resister realized that boycott is never an end within itself, but merely a means to awaken a sense of shame within the oppressor; that the end is reconciliation; the end is redemption. And so the aftermath of violence is bitterness; the aftermath of non-violence is the creation of the beloved community; the aftermath of non-violence is redemption and reconciliation. This is a method that seeks to transform and to redeem, and win the friendship of the opponent, and make it possible for men to live together as brothers in a community, and not continually live with bitterness and friction.
from “Justice Without Violence,” April 3, 1957

But the end is reconciliation; the end is redemption; the end is the creation of the beloved community. It is this type of spirit and this type of love that can transform opposers into friends. The type of love that I stress here is not eros, a sort of esthetic or romantic love; not philia, a sort of reciprocal love between personal friends; but it is agape which is understanding goodwill for all men. It is an overflowing love which seeks nothing in return. It is the love of God working in the lives of men. This is the love that may well be the salvation of our civilization.
from “The Role of the Church in Facing the Nation's Chief Moral Dilemma,” 1957

The URL for this page is http://www.wearethebelovedcommunity.org/bcquotes.html